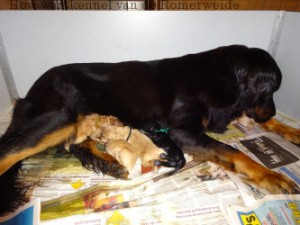 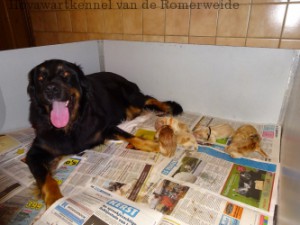 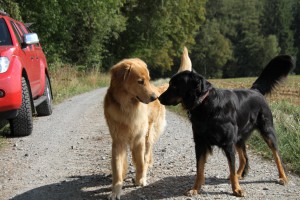 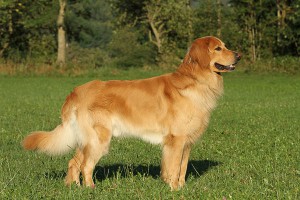 The N-litter van de Romerweide is born at November 12th 2015. Arizona van de Romerweide gave birth to nine puppies, 5 dogs and 4 bitches. Mother and puppies are doing well. Arizona started with 6 blond puppies. After some waiting from breeder and studdog-owner Carmen, Arizona deliverd three black and golds after that. We are very happy with the litter.

At Friday September 11th it was finally time. It was the fourteenth day of Arizona's season. In the morning we left for Stuttgart, Germany. In the afternoon we arrived at Bendix vom Tüfelsland, a beautifull blond dog and Carmen Straub, the owner.

With two cars we went to a quiet place along the forest. At this place Bendix often makes his walks. After a short play in the sunshine, we went for the shade. There was a good mating without any problems.

After some talking and something to drink, Arizona and I went on our way to the hotel. Of course I was very happy. Next day we went back for a second mating. This also gave no problems. Now we have to wait.......

Ultrasound confirmed the pregnancy. We expect the puppies about November 14th.